There were 6 horses out for this ride. Honesta, Hannah, Hiadlgo, Hannibal, Harry and Flame.

This was our first ride after the Carnival season. In a previous post I mentioned I would be riding either Honesta or Marac. Well Marac went on a patrol so I rode Honesta.

We started the class at the walk to so the horses could stretch out. We started off with the exercises where the last rider would walk to take the front of the ride. We did this at the trot and at the canter as well.

We didn’t ride in two weeks so the horses were fresh and there was a bit of acting up . About five minutes into the ride Hidalgo ran out of the ride. He did this a few times well. It took a while to calm him down.

Whenever Hidaldo would act up it would set off a chain reaction- Hidalgo, Hannah, Hannibal. One or two times Honesta joined in as well.

I was at the front of the ride to start and when we started to trot I had some trouble keeping Honesta at the pace I wanted so I moved to second. I have been struggling with ‘easing and feeling’ since I’ve started riding and I still haven’t gotten it down yet.

We did the exercise where the first rider goes around the school and takes the back of the ride. We did this at the canter while the rest of the ride was at the trot. I think the horses did a pretty good job at this.

Some time during the ride I looked back and I saw Hannibal buck but his rider kept her seat really well and got him going again. There was a time too when Hannah stopped mid trot and kicked back with both her legs and hit me. It wasn’t too hard but it was quite shocking.

At the end of the ride we got to canter for a bit which was great! A few time the horses came out of the canter but overall I had a nice experience with the wind blowing in my face and adrenaline flowing through my veins.

It was a good ride! 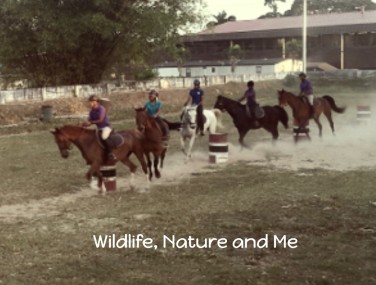 I have two blogs, one for general stuff and the other for my Sims Legacy. View all posts by JordanFall